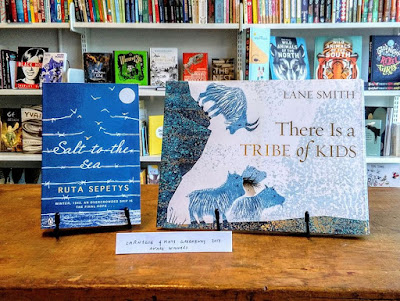 The 2017 CILIP Carnegie Medal for Outstanding Book for Children and Young People:
Salt to the Sea by Ruta Sepetys
It's early 1945 and a group of people trek across Germany, bound together by their desperation to reach the ship that can take them away from the war-ravaged land. Four young people, each haunted by their own dark secret, narrate their unforgettable stories. They converge in a desperate attempt to board an overcrowded ship in a Baltic port, which is tragically then sunk by a torpedo. Based on a true story, the incident was the worst maritime tragedy ever.
The 2017 CILIP Kate Greenaway Medal for Outstanding Book in Terms of Illustration:
There is a Tribe of Kids by Lane Smith
Lane Smith takes us on a colourful adventure through the natural world, following a child as he weaves through the jungle, dives under the ocean and soars into the sky. Along the way he makes friends and causes mischief with a dazzling array of creatures both large and small - but can he find a tribe of his own? Full of warmth and humour, There Is a Tribe of Kids is a playful exploration of wild childhood - of curiosity, discovery and what it means to belong.

The Amnesty CILIP Honours:
Carnegie: The Bone Sparrow by Zana Fraillon
Greenaway: The Journey by Francesca Sanna
Posted by Volume Books at 21:47