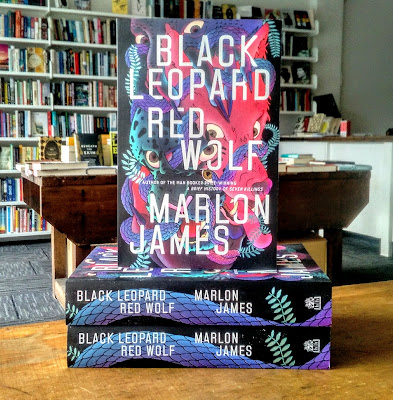 Our Book of the Week this week is Black Leopard, Red Wolf by Booker Prize winner Marlon James, a remarkable fusion of African mythology, history and fantasy.
" Black Leopard, Red Wolf  is the kind of novel I never realized I was missing until I read it. A dangerous, hallucinatory, ancient Africa, which becomes a fantasy world as well-realized as anything Tolkien made, with language as powerful as Angela Carter's." -  Neil Gaiman

>> Read Stella's review.
>> "You have to risk going too far."
>> The 'African Game of Thrones' is going to be made into a film!
>> “We shapeshift, we code switch, we role play. We are different things to different people.”
>> Toppling fantasy tropes.
>> The book was conceived in a friendly argument.
>> "More Rabelais than Tarantino."
>> What is the difference between European and African folk traditions?
>> The book is the first in the 'Dark Star' trilogy.
>> A Brief History of Seven Killings won the 2015 Man Booker Prize.
>> John Crow's Devil.
Posted by Volume Books at 22:23

Email ThisBlogThis!Share to TwitterShare to FacebookShare to Pinterest
Labels: Book of the week