All That is Evident is Suspect: Readings from the OuLiPo, 1963-2018 edited by Ian Monk and Daniel Levin Becker         $64
l'Ouvroir de Littérature Potentielle (workshop for potential literature) was founded by Raymond Queneau and François Le Lionnais in 1960 as a sort of laboratory in which members can perform experiments - chiefly experiments of constraint - in order to use the mechanisms inherent language to express new literary forms. This wonderful anthology presents the results of experiments various members through the decades, and provides a primer for you to run the experiments yourself.
>> N+7
>> Lille
>> Other extracts.

Resistance by Julián Fuks       $38
A young couple, involved in the struggle against the military dictatorship in 1970s Argentina, must flee the country. The brutality and terror of the regime is closing in around them. Friends are being ‘disappeared’. Their names are on a list. Time is running out. When they leave, they take with them their infant son, adopted after years of trying for a child without success. They build a new life in Brazil and things change radically. The book unfolds as an intimate portrayal of the formation of a family under extraordinary circumstances, told from the point of view of the youngest child. It’s an examination of identity, of family bonds, of the different forms that exile can take, of what it means to belong to a place, to a family, and to your own past.
"A brilliant achievement." - Le Monde

Human Relations, And other difficulties by Mary-Kay Wilmers          $30
Essays, book reviews, short articles and obituaries handling subjects from mistresses to marketing, and seduction to psychoanalysts, from the immensely opinionated, witty and acute editor of the London Review of Books.

The Changeling by Joy Williams        $33
A remarkable novel from one of American fiction's outstanding stylists and observers, author of The Visiting Privilege and  99 Stories of God. First published in 1978, this novel blends myth with alcohol, time with desperation, motherhood with extinction, and is as fresh and urgent today as it was when first published.
"Like no book I have read, The Changeling is illumined by the spark of life, the life that wears a thousand skins. Its wisdom is unparaphrasable." - Karen Russell
>> 'Uncanny the Singing that Comes from Certain Husks.'

Half-Light: Collected poems, 1965-2016 by Frank Bidart       $33
Frank Bidart, for several decades, has waged a collision between language and the human body which has resulted in some of the most original and surprising poetry produced in America.
Winner of the Pulitzer Prize for Poetry 2018 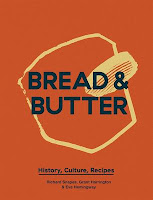 Bread & Butter: History, culture, recipes by Grant Harrington, Richard Snapes and Eve Hemingway      $40
Bread and butter are first recorded as being eaten together in 1492. This book looks at a long association, and provides 40 outstanding and varied recipes that celebrate the marriage of bread and butter.

Crimson by Niviaq Korneliussen      $35
The island has run out of oxygen. The island is swollen. The island is rotten. The island has taken my beloved from me. The island is a Greenlander. It's the fault of the Greenlander. In Nuuk, Greenland, Fia breaks up with her long-term boyfriend and falls for Sara. Sara is in love with Ivik who holds a deep secret and is about to break promises. Ivik struggles with gender dysphoria as their friends become addicted to social media, listen to American pop music and get blind drunk in downtown bars and uptown house parties. Then there is Inuk, who also has something to hide - it will take him beyond his limits to madness, and question what it means to be a Greenlander, while Arnaq, the party queen, pulls the strings of manipulation, bringing a web of relationships to a shocking crescendo. Translated from Greenlandic.
"Ferocious, inventive and unlike anything I've read in a long time." - Sophie Mackintosh (author of The Water Cure)

Locus Solus by Raymond Roussel       $17
A strange and strangely wrought novel (first published in 1914) in which, in the words of John Ashbery, "A prominent scientist and inventor, Martial Canterel, has invited a group of colleagues to visit the park of his country estate, Locus Solus. As the group tours the estate, Canterel shows them inventions of ever-increasing complexity and strangeness. Again, exposition is invariably followed by explanation, the cold hysteria of the former giving way to the innumerable ramifications of the latter. After an aerial pile driver which is constructing a mosaic of teeth and a huge glass diamond filled with water in which float a dancing girl, a hairless cat named Khóng-dek-lèn, and the preserved head of Danton, we come to the central and longest passage: a description of eight curious tableaux vivants taking place inside an enormous glass cage. We learn that the actors are actually dead people whom Canterel has revived with 'resurrectine', a fluid of his invention which if injected into a fresh corpse causes it continually to act out the most important incident of its life."
>> A brief biography of Roussel.
>> Interiors in the Void.

How to Write an Autobiographical Novel by Alexander Chee     $37
The author of The Queen of the Night delivers a series of superb essays investigating his development as a person and as a writer and activist, intimating how we form our identities both in life and in art.
"Alexander Chee is the very best kind of essayist, a boon companion in good times and bad, whose confiding voice you'd follow anywhere, just for the wonderful feeling of being understood like never before." - Charles D'Ambrosio
"Masterful." - Roxanne Gay 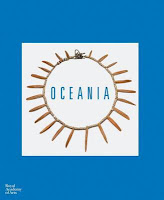 Oceania by Anne Salmond, Peter Brunt, Sean Mallon et al             $140
Brings together recent scholarship by experts in the field and featuring a wide array of objects from the region, including many that have never been published before. Included are many works that have historically been overlooked, such as painted and woven textiles, elaborate wicker assemblages and expressively sculpted vessels, alongside works by artists working in Oceania today. These objects reveal a complex web of social, mythological and historical influences.

Childhood by Gerard Reve        $28
Two novellas from the author of The Evenings. Young Elmer longs to make friends and tries to control the world around him by forming secret clubs, of which he is always the president, but when he invites Werther to become a member, a game of attraction and repulsion begins. During the Nazi occupation of Amsterdam, a boy watches as the family of one of his friends slowly loses everything and is then taken away.

Duchamp's Last Day by Donald Shambroom         $19
Just moments after Duchamp died, his closest friend Man Ray took a photograph of him. His face is wan, his eyes are closed, he appears calm. Taking this image as a point of departure, Donald Shambroom begins to examine the surrounding context: the dinner with Man Ray and another friend, Robert Lebel, the night Duchamp died, the conversations about his own death at that dinner and elsewhere, and the larger question of whether this radical artist's death can be read as an extension of his work. 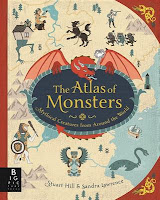 The Atlas of Monsters: Mythological creatures from around the world by Stuart Hill and Sandra Lawrence        $37
Useful.

The Sea: A philosophical encounter by David Farrell Krell        $49
What does the sea mean? Humankind has a profound and complex relationship with the sea, a relationship that is extensively reflected in biology, psychology, religion, literature and poetry. Krell engages the work of an array of thinkers and writers including, but not limited to, Homer, Thales, Anaximander, Heraclitus, Plato, Aristotle, many Greek gods, Holderlin, Melville, Woolf, Whitman, Nietzsche, Heidegger, Schelling, Ferenczi, Rank and Freud. 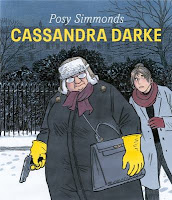 Cassandra Darke by Posy Simmonds        $48
An idiosyncratic, devastating graphic novel. Cassandra Darke is an art dealer, mean, selfish, solitary by nature, living in Chelsea in a house worth £7 million. She has become a social pariah, but doesn't much care. Between one Christmas and the next she has sullied the reputation of a West End gallery and has acquired a conviction for fraud, a suspended sentence and a bank balance drained by lawsuits. On the scale of villainy, fraud seems to Cassandra a rather paltry offence - her own crime involving 'no violence, no weapon, no dead body'. But in Cassandra's basement, her young ex-lodger, Nicki, has left a surprise, something which implies at least violence and probably a body, something which forces Cassandra out of her rich enclave and onto the streets. Not those local streets paved with gold and lit with festive glitter, but grimmer, darker places, where she must make the choice between self-sacrifice and running for her life.

So opens Thom Eagle’s description of the creation of a singular early spring meal. A cookbook without recipes, this is an invitation to journey through the mind of a chef as he works. Eagle muses on the very best way to coax flavour out of an onion (slowly, and with more care than you might expect), and considers the crucial role of salt in the creation of the perfect assembly for early green shoots and leaves. 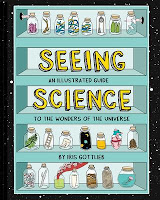 Seeing Science: An illustrated guide to the wonders of the universe by Iris Gottlieb       $45
Science is really beautiful. Artist and lay scientist Iris Gottlieb explains among other things: neap tides, naked mole rats, whale falls, the human heart, the Uncertainty Principle, the ten dimensions of string theory, and how glaciers are like Snickers bars.

Forge and Carve: Heritage crafts, their revival and sustainability in a modern world        $70
With knowledge passed down from centuries ago, the presence of traditional crafts such as spoon carving, leather working, and knife making is becoming more and more pronounced in contemporary culture and on platforms such as social media and ecommerce. As the pressures of a fast-paced, modern-day life weigh on people, many seek solace in more manual, artful practices that take us out of our selves and produce something beautiful and useful. Forge & Carve looks at twenty crafters and how and why they create the items they do. Includes Takaka trugmaker Tony Hitchcock.

Blood Ties: A memoir of hawks and fatherhood by Ben Crane        $45
This is a book about a man's relationship with hawks, and his self-education as a falconer, and about his discovery that despite his Asperger's Syndrome, which hampers his normal social interactions, he can forge a loving bond with the young son he thought he had lost.

Heavy: An American memoir by Kiese Laymon       $25
What does the weight of a lifetime of secrets, lies and deception do to a black body, a black family and a nation teetering on the brink of moral collapse?
"Unflinchingly honest." - Reni Eddo-Lodge

American Overdose: The opioid tragedy in three acts by Chris McGreal        $33
The opioid epidemic has been called one of the greatest mistakes of modern medicine but calling it a mistake is a generous rewriting of history. Driven by greed, incompetence, and indifference, it was an utterly avoidable tragedy. 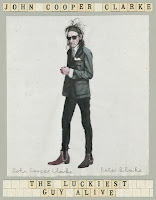 The Chinese Typewriter: A history by Thomas Mullaney       $52
How Chinese characters triumphed over the QWERTY keyboard and laid the foundation for China's information technology successes today. Chinese writing is character based, the one major world script that is neither alphabetic nor syllabic. Through the years, the Chinese written language encountered presumed alphabetic universalism in the form of Morse Code, Braille, stenography, Linotype, punch cards, word processing, and other systems developed with the Latin alphabet in mind. This book is about those encounters, in particular thousands of Chinese characters versus the typewriter and its QWERTY keyboard. Thomas Mullaney describes a fascinating series of experiments, prototypes, failures, and successes in the century-long quest for a workable Chinese typewriter.

On Contemporary Art by César Aira     $19
An essay on bridging the gap between writing and the visual arts.
>> An extract: 'Why Contemporary Art (and Literature) Needs More Sarcastic Critics' 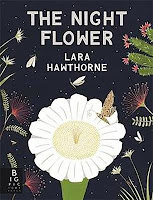 The Night Flower by Lara Hawthorne      $28
The night flower blooms at night in the desert. Who notices it?

Browse: Love letters to bookshops around the world edited by Henry Hitchings       $23
Well, of course.