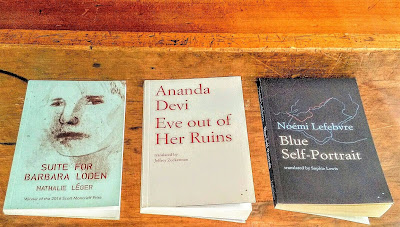 Featured publisher: LES FUGITIVES
Les Fugitives publishes only short books that have been written by award-winning, female, francophone writers who have previously not been translated into English. Founded in 2015, they have published three astoundingly good books so far.    {Reviews by Thomas}

Suite for Barbara Loden by Nathalie Léger          $30
Léger was commissioned to write a short biographical entry on Barbara Loden for a film encyclopaedia but ended up writing a very interesting and quite unusual book. Loden directed one film, >>Wanda (1970), about a woman who leaves her husband and who, passively and therefore pretty much by chance, attaches herself to a man who is planning a bank robbery for which, following his death in a police shoot-out and despite her lack of initiative and her not even being present at the robbery (she took a wrong turn in what was supposed to be the getaway car), she will be sent to jail for twenty years. The book operates on many levels simultaneously: it is ‘about’ Léger’s attempts to excavate information about Loden, principally beneath the ways in which she has been recorded by others, notably her husband the Hollywood director Elia Kazan, who also wrote a novel in which Loden features, thinly disguised; it is ‘about’ Loden’s making of the film Wanda; it is ‘about’ the character of Wanda in that film, a character Loden played herself and with whom she strongly identified personally; it is ‘about’ the tension between the “passive and inert” Wanda character with whom Loden identifies and Loden as writer and director, and about the relationship between author and character more generally in both an literary/artistic and a quotidian sense; it is ‘about’ Léger’s search for and discovery of the true story that inspired Loden to make the film, a botched 1960 bank robbery after which the passive and inert Alma Malone politely thanked the judge for handing her a twenty-year sentence; it is ‘about’, therefore, the relationship between inspiration and execution, and between actuality and  fiction; it is ‘about’ portrayal and self-portrayal and ‘about’ who gets to define whom (“To sum up. A woman is pretending to be another, in a role she wrote herself, based on another (this, we find out later), playing something other than a straightforward role, playing not herself but a projection of herself onto another, played by her but based on another.”); it is ‘about’, cumulatively, the way in which, as she delved more deeply into the specifics of another whom she sought to understand, Léger come up more and more against the unresolved edges of herself so that the two archaeologies became one (she also ended up learning quite a lot about her mother and the imbalanced mechanics of her parents’ relationship). When Wanda was released in 1970, it was disparaged in many feminist circles for its portrayal of a passive woman. Léger shows the film to be a useful mirror in which to recognise passivity as not only an impulse for self-erasure on a personal level but as part of the wider social mechanisms by which women are erased and colonised by projections, and in which the feminist critique and frontline necessarily become internal and self-reflexive. There is also in this book a strong sense of the inescapability of subjectivity, that in all subject-object relationships the subject perceives only and acts only upon a sort of externalised version of itself (the object being passive and without feature (effectively absent, effectively unassailable)); and also that when attempting to be/conceive of/portray oneself one has no option but to use the template of that with which one identifies but which is not in essence (whatever that means) oneself (except to the extent that one’s ‘self’ perhaps exists only in the mysterious act of identification). Oh, and Léger‘s writing is exquisite. (>>Read an extract)

Eve Out of Her Ruins by Ananda Devi         $30
Devi does an excellent job of inhabiting the heads and capturing the patterns of thought that occur just on the brink of consciousness of the four narrators of this account of young lives in the slums of Port Louis in Mauritius. Just as a plughole communicates its force at all times to the entire contents of a basin, even to the molecules that have not yet begun to circle or descend, there is throughout the book a sense that a hopeless future is pulling upon the characters, that their descent will be at first slow and then sudden, that the world for them is tilted and greased, that their voices are impermanent, that they will become those that now harm them and are caught by harm. “One day we wake up and the future has disappeared.” In a milieu where the energies of sex and violence already run in the same channels, where currency is extracted in rape, beatings and murder, how can the voices of individuals, and how can moments of happiness and beauty, be preserved as more than corruscations swallowed, first slowly and then suddenly, by future shadow? Is to fight against your fate a way of preserving your independence from it, for a short moment at least, or does fighting it draw it more tightly entangled upon you?

Blue Self-Portrait by Noémi Lefebvre         $30
It takes approximately an hour and a half to fly from Berlin to Paris. Upon that hour and a half, a human memory, especially one working at neurotically obsessive speed, can loop a very large amount of time indeed, an hour and a half is plenty of time to go over and go over the things, or several of the things, the unassimilable things, that happened in Berlin, in an attempt to assimilate those things, though they are not assimilable, in an attempt, rather, albeit an involuntary attempt, to damage oneself by the exercise of one’s memories, to draw self-blame and self-disgust from a situation the hopelessness of which cannot be attributed to anything worthy of self-blame or self-disgust but which is sufficiently involved to exercise the self-blame and self-disgust that seethe always beneath their veneer of not-caring, of niceness, the veneer that preserves self-blame and self-disgust from resolution into anything other than self-blame and self-disgust. Upon this hour and a half can be looped, such is the efficacy of human memory, not only, obsessively, the unassimilable things that happened in Berlin but also much else that happened even into the distant past, but, largely speaking, the more recent things that have bearing upon, or occupy the same memory-pocket, not the best metaphor, as the unassimilable things that happened in Berlin, for disappointment and failure seldom happen in a vacuum but resonate with, even if they are not the direct result of, disappointments and failures reaching back even into the distant past, self-blame and self-disgust having the benefit, or detriment, if a difference can be told between benefit and detriment, of binding experiences to form an identity, and, not only this, upon that hour and a half can be looped also an endless amount of speculation and projection as to what may be occurring in the minds of others, or in the mind of, in this case, a specific other, a German-American pianist and composer with whom the narrator, who has been visiting Berlin with her sister, has had some manner of romantic encounter, so to call it, the extent of which is unclear, both, seemingly, to the narrator and, certainly, to the reader, the reader being necessarily confined to the mental claustrophobia of the narrator, on account of the obsessive speculation and projection and also the inescapable escapist and self-abnegating fantasising on the part of the narrator, together with the comet-like attraction-and-avoidance of her endless mental orbit around the most unassimilable things that happened in Berlin, or that might have happened in Berlin, or that did not happen in Berlin but are extrapolative fantasies unavoidably attendant upon what happened in Berlin, untrue but just as real as truth, for all thoughts, regardless of actuality, do the same damage to the brain. Lefebvre’s exquisitely pedantic, fugue-like sentences, their structure perfectly indistinguishable from their content, bestow upon her the mantle of Thomas Bernhard, which, after all, does not fall upon just any hem-plucker but, in this case, fully upon someone who, not looking skyward, has crawled far enough into its shadow when looking for something else. Where Bernhard’s narrators tend to direct their loathing outwards until the reader realises that all loathing is in fact self-loathing, Lefebvre’s narrator acknowledges her self-loathing and self-disgust, abnegating herself rather for circumstances in which self-abnegation is neither appropriate nor inappropriate, her self-abnegation arising from the circumstances, from her connection with the circumstances, from her rather than from the circumstances, her self-abnegation not, despite her certainty, having, really, any effect upon the circumstances. Not at all not-funny, pitch-perfect in both voice and structure, full of sly commentary on history and modernity, and on the frailties of human personality and desire, providing for the reader simultaneous resistance and release, Lefebvre shares many of Bernhard’s strengths and qualities, and the book contains memorable and effective passages such as that in which the narrator recalls playing tennis with her mother-in-law, now her ex-mother-in-law, and finding she is not the type for ‘collective happiness’, or her hilariously scathing descriptions of Berlin’s Sony Centre or of Brecht’s house, now a restaurant, or of the narrator's inability to acknowledge the German-American pianist-composer's wife as anything but 'the accompaniment', or, indeed many other passages, but the excellence of the book is perhaps less in the passages than in the book as a whole. I will be surprised if I read a better book this year.
>>Read an extract here.


Visit the publisher's website to find out more about Les Fugitives and about these books and authors.