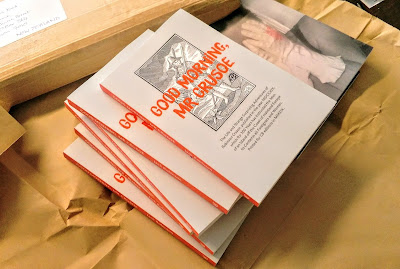 Our Book of the Week this week is Good Morning, Mr Crusoe: The Life and Strange Surprizing Adventures of Robinson Crusoe, published in the year MDCCXIX, which for 300 Years has instructed the Men of an Island off the Coast of Mainland Europe to Contemn all Foreigners and Women by Jack Robinson. Published to mark the 300th anniversary of first publication of Robinson Crusoe, this book argues that the legacy of Defoe's novel is racism and misogyny embedded in the fabric of British society.

>>Read Thomas's review.
>>"The road to Brexit starts here."
>>"The location of a great malady" - from Patrick Keillor's Robinson in Ruins.
>> "England is a very powerful country."
>> J.M. Coetzee: 'He and His Man' and Foe.
>>M.J. Carter on the literary artefacts of the colonial past.
>> The book is published by the wonderful small press, CB Editions.
>>'Jack Robinson' is a pseudonym of CB Editions publisher Charles Boyle. Read Thomas's reviews of other books by this 'Jack Robinson':
Blush (with Natalia Zagorska-Thomas)
By the Same Author
Robinson
An Overcoat: Scenes form the afterlife of H.B.
>>Writing under the pseudonym 'Jennie Walker', Charles Boyle won the 2008 McKitterick Prize for 24 for 3.
>> The Manet Girl by Charles Boyle writing as 'Charles Boyle'.
>>Boyle's blog, Sonofabook.
>> Murmur by Will Eaves, also published by CB Editions, has just been awarded the 2019 Wellcome Prize. >>Read Thomas's review.
>>Click and collect a copy of our Book of the Week.

Email ThisBlogThis!Share to TwitterShare to FacebookShare to Pinterest
Labels: Book of the week