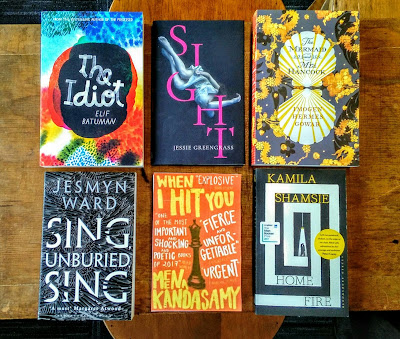 The Idiot by Elif Batuman         $37
"I'm not Turkish, I don't have a Serbian best friend, I'm not in love with a Hungarian, I don't go to Harvard. Or do I? For one wonderful week, I got to be this worldly and brilliant, this young and clumsy and in love. The Idiot is a hilariously mundane immersion into a world that has never before received the 19th Century Novel treatment. An addictive, sprawling epic; I wolfed it down." - Miranda July

The Mermaid and Mrs Hancock by Imogen Hermes Gowar         $37
“What trapped creature does not strike out?” One September evening in 1785, the merchant Jonah Hancock hears urgent knocking on his front door. One of his captains is waiting eagerly on the step. He has sold Jonah’s ship for what appears to be a mermaid. As gossip spreads through the docks, coffee shops, parlours and brothels, everyone wants to see Mr Hancock’s marvel. Its arrival spins him out of his ordinary existence and through the doors of high society. At an opulent party, he makes the acquaintance of Angelica Neal, the most desirable woman he has ever laid eyes on and a courtesan of great accomplishment. This meeting will steer their lives on a dangerous new course. What will be the cost of their ambitions? And will they be able to escape the destructive power mermaids are said to possess?
"Historical fiction at its finest." - Irish Times
"A brilliantly plotted story of mermaids, madams and intrigue in 1780s London and I wouldn't be surprised to see it become the Essex Serpent of 2018." - The Pool

Sight by Jessie Greengrass         $38
An accomplished, thoughtful and somewhat melancholy novel, tracking the thoughts of an expectant mother whose own mother has just died, whose ruminations on the mind, the body, living and dying encompass swathes of science and philosophy (as well as her own life).
"The writing is poised – but as if on the edge of a precipice. Hovering between the novel and the essay, unfolding through long, languorous sentences, Sight builds meaning through juxtaposition, through surprising mirrorings and parallels. - Guardian

When I Hit You, Or, A portrait of the writer as a young wife by Meena Kandasamy         $22
Caught in the hook of love, a young woman marries a dashing university professor. She moves to a rain-washed coastal town to be with him, but behind closed doors she discovers that her perfect husband is a perfect monster. As he sets about battering her into obedience and as her family pressures her to stay in the marriage, she swears to fight back - a resistance that will either kill her or set her free.
"Explosive." - Guardian
"Urgent." - Financial Times

Home Fire by Kamila Shamsie         $27
Family, society, love and religion clash in this modern reworking of the themes of Antigone. Long-listed for the 2017 Man Booker Prize.
"Home Fire left me awestruck, shaken, on the edge of my chair, filled with admiration for her courage and ambition. Recommended reading for prime ministers and presidents everywhere." - Peter Carey
"Shamsie's simple, lucid prose plays in perfect harmony with the heartbeat of modern times. Home Fire deftly reveals all the ways in which the political is as personal as the personal is political. No novel could be as timely." - Aminatta Forna

Sing, Unburied, Sing by Jesmyn Ward         $27
As 13-year-old Jojo approaches adulthood, how can he find his way in the U.S. South when all seems set for him and his family to fall foul of rural poverty, drug addiction, the penal system, the justice system, racism and illness? From the author of Salvage the Bones.
"This wrenching new novel by Jesmyn Ward digs deep into the not-buried heart of the American nightmare. A must." - Margaret Atwood
"A powerfully alive novel haunted by ghosts; a road trip where people can go but they can never leave; a visceral and intimate drama that plays out like a grand epic, Sing, Unburied, Sing is staggering." - Marlon James
>> Read Stella's review.